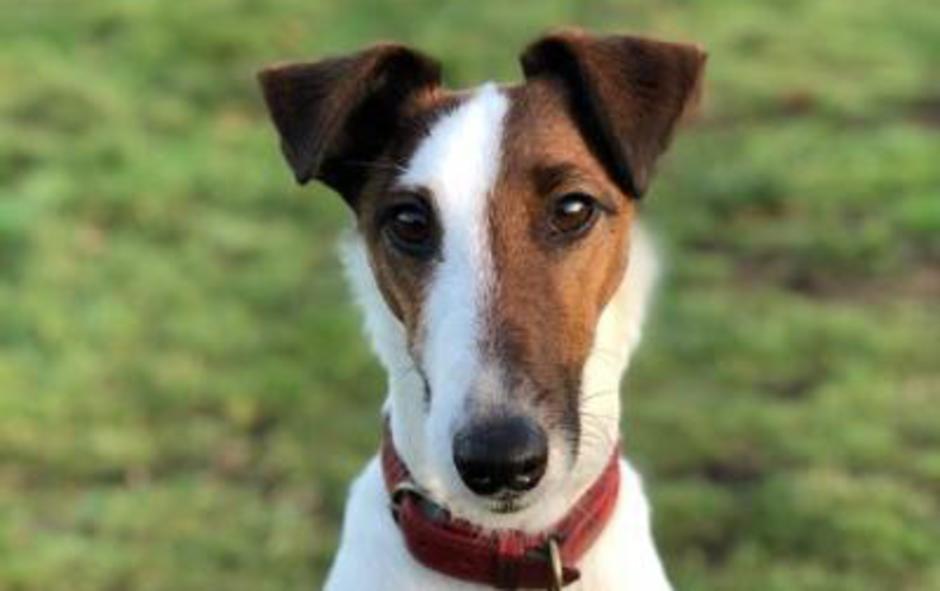 Alfie relaxed travelling to his new home yesterday.
Pauline his new owner updates with him having a quiet night but
eager for his walks today.
Good Luck Alfie in your forever
loving home . Have a wonderful
life. We miss you already. Such a super boy x Aug2020 `Elmo` Rehomed April 2020
Elmo has been with us for two years.He came in because his owners couldn`t handle himas he was a big strong boy and a terrier cross.He had lots of people interested in him.
They came and visited ,loved him,played with him but because he wasn`t a true fox terrier, went away with out him. To us he was exceptional. He could play football forever more and was great at it,we came to love him dearly,he made us laugh so much with antics he got up to.
Just before lockdown a couple came to see us as they had lost their little foxie.
Elmo came in and that was that, Elmo had chosen his new owners to be.
They loved him.
He writes often giving me updates on how he is getting on.
Watch this space........

Daisy & Bertie
Rehomed just before lockdown April 2020
Brother & Sister.  Great pair of foxies.
Although not always honey together are getting on well in their new home

Rosie who was rehomed last year  (2019) loves to help (or hinder). Watering the garden! Having a hose next week. Minnie was rescued as a stray by Dogs Trust Glasgow and brought over from Ireland. We've had her for 2 years and she's around 10yo. She's so full of character and makes us laugh every day and comes everywhere with us. Deb & Allan

Salty has come on leaps and bounds and we absolutely adore her! I’m not saying she’s perfect..... yet... but she gives us so much joy and she’s seeing us through this awful time that we’re in. We keep saying to each other, thank God for the dog! She’s so funny and keeps us amused and on our toes!

Here is Chas, (was Archie) coming up to 12years old in February. Still all puppy and terrier, loves a game of tug with his blanket.
Loves his off lead walks on The New Forest, returns to whistle, loves other people, but never learnt to play with other dogs. Never aggressive to other dogs, will back off if challenged.
Totally ignores forest ponies and donkeys, except when they have the nerve to wonder by 'his' garden fence. John & Chas. Pepe settling in well in his new home. We've had a busy day today. Some retail therapy at Pets at Home for some new gear. A lovely walk by the river to Tan Y Bwlch beach for a paddle. Home for a nap before dinner then another nap and a game of tug before 'nite, nite' biscuits and bed. I've been told off for grumbling at Huxley but we did have a nice play together this morning. We do miss you but we think we will be happy here.
Huxley & Tyggi xx ??

Derby has now found his forever home with Mary & Eddie.
Losing their foxy Dexter earlier in the year ,missing him greatly have now adopted Derby, an absolutely fabulous foxy terrier a credit to his former owner.
Enjoy your new home Derby we all miss you.Lee x Brunel has now found his forever home with Pauline and her family
Looking totally relaxed at home
Be a good boy Brunel we all miss your grumbling!!!!!!

17mth old Basil looking settled in his new home
with the Graham family.
Be always a good boy Basil.Have Fun in your new home
July 2019

Sid posing for his new owners. Off to his new abode.

A fabulous boy and a gentleman. Be happy Sid we

will all miss you x

Sluggit now renamed Eric meeting his new friend and partner in crime Rosie. I know who the boss will be!

Good Luck Eric have a great life with Rosie. May 2019

A year on and Lola settled well in her new home
and taking a walk in the blue bell woods with her owner Martin. May 2019

Daisy with her new owner Doug having her harness on to travel to her new home in Bonnie Scotland. May 2019

Rosie settling in with Jackie her new owner and sharing her new home with Milo but evidently not sharing her toy with him!! Be a good girl.

Buster ready for the off with his new owners. Going to Bonnie Scotland. Be a good boy....Auntie Lee will be watching you!

Skye showing off her haircut to her new owner before going to her new home in Shropshire. Have a wonderful life. You are just a little sweetie.

Sid & Bessie all washed and groomed looking smart and off to their new home today. All the best you two and no arguing over treats. March 19

Solo off to his new home in Wales with his new buddies.

I wonder who is going to wear each other out first, especially if there is a ball around.  Be a good boy Solo and have a great life. Jan19

Colin waiting patiently while paperwork being done before
going off to his new home,if you look carefully he is falling asleep.Bless him Oct 2018

Pixie has now found her forever home and is doing really well, gaining
confidence every day, with the help of her new owners who are giving her lots of love and patience.
All the best Pixie have a wonderful life.
October 2018
"Mike & I have had Pixie just over 6 months and we love
her so much. When we think how traumatised and shut down she was when we brought her home it is amazing to see the happy fun loving little girl she is now. She loves her walks and meeting some of her doggy friends althought can be nervous of dogs that she doesn't know. She is such an affectionate little soul and loves nothing more than a cuddle. She is enjoying being in the garden with us and we are working on her recall.  We are looking forward to having her off the lead on the beach later in the year.  We get lots of compliments about her good looks. We feel so lucky that we were given her. She makes us very happy watching her play with her various toys. I thought you would appreciate an update." April 2019

Nala (was Lola) who now lives with Tasha. June 18.

Mollie in her new home with Alan. Photo of Mollie with Alan's Daughter's dog Ned. June 18.

Coco waiting for the off.Going to live in the North of England
Good luck Coco.
Super little dog ,so friendly and loving. Feb18

Maggie off to her new home lastTuesday
Good luck Maggie, this little girl suffered from
separation anxiety, hopefully we have made
good progress and she is going to her new home
where the lady of the house in home all day.
Dec17

Dotty off to her new home with Fluffy who was homed by us last year to Julia & her husband. They have many years experience of wires ,so both are in great hands.
Fluffy loves toys so it's a good thing that Dotty prefers chewsticks & balls. Nov17

Woody yesterday off to his new home in Lincs. with new owner Susan. Looking forward to those lovely country walks. Sept 2017

Jake off today to his new home. Here he is already packed and waiting. Going to live with Lyn & Bob in Essex. September 2017

Having great fun in his new garden. Sept 2017

Cotton was Buttons in his new home with Sarah. July 2017

" He's settling in well. Teaching him a few more manners but he's very good, very soft and loves to be loved!!"

Archie who was adopted by Clive and Shirley.

Hazel wrote to us " Thought we might let you  know how well Ailsa settled in.  She is fantastic, always into mischief, full of fun and energy, makes us laugh so much with her antics, tail wags continuously, we love her to bits and so do all that meet her.  Dreading next week when she is to be speyed, just her being away from us for a few hours.  The vet is pleased with her skin but still has treatment to her ears.  We bless the day she came to us .... THANK YOU."

My daughter and I collected from FTR UK one sunny October day 5 (?) years ago. How time flies! He is in his prime - he enjoys meeting people and is admired wherever he goes. He runs 5k park runs with his friend Tessa, greatly enjoys his food and travelling by car or train. He is so loved, and we are grateful for the opportunity of giving him a new life. Pauline July 2017

Merlin in the Hay! Rehomed with Percy and Beth. July 2017

Poppy has now settled into her new home. Her new friend Kelsey has come to the conclusion that it is best to let her have her own way for a quiet life.

Griff Has settled really well in his new home with Richard and Penny. FTR was asked by a company to supply a smooth for a photo shoot and put them in touch with Griff`s new owners and they took him along. He was very good ,so hopefully he will be on one of their advert posters. We will have to wait and see.Fame! May2017

Colin off to his new home and having a cuddle with one of his new family members. Have a wonderful life Colin.....just don't wear them out too much with your ball games x

Lexi (was Jane) in her new home with Bertie.

Ferry in her new home.

Leonard after his cut and finish ready for the off to his new home.

Olly was Millan adopted by Wendy with new big brothers Vinnie and Fagan.

Nellie sitting on her new owner's lap and then taking her rightful place in the back of her Range Rover. She now wishes to be known as Arabella! Is it Lady Arabella? One wonders with a foxy!!

Ali with her new family

Tasker who was rehomed and lives with Sue & Warren.

Galou (was Rocky) rehomed January 2016 and lives with Mel.

Chas (was Archie) was Adopted by John January 2016.

Riley who was adopted by Susan.

Bobby who was adopted in August 2015 by Deb

Milo now rehomed and doing well with Maureen and Gary.

Ronnie SFT 10yo has now been rehomed in Buckinghamshire.

Minnie now rehomed on the Isle of Wight with WFT Albert.

Bella aka "Queen Bella surveying her territory. All is going well. She has settled easily and is a delight. We're so pleased to have her." message from Peter who adopted her.

Bella sitting having tea with her new owners at the Vicarage and no doubt will be doing a lot of 'Afternoon Tea'?

Kernal has had his cut and finish and off to his new home but must check he has all his belongings packed!